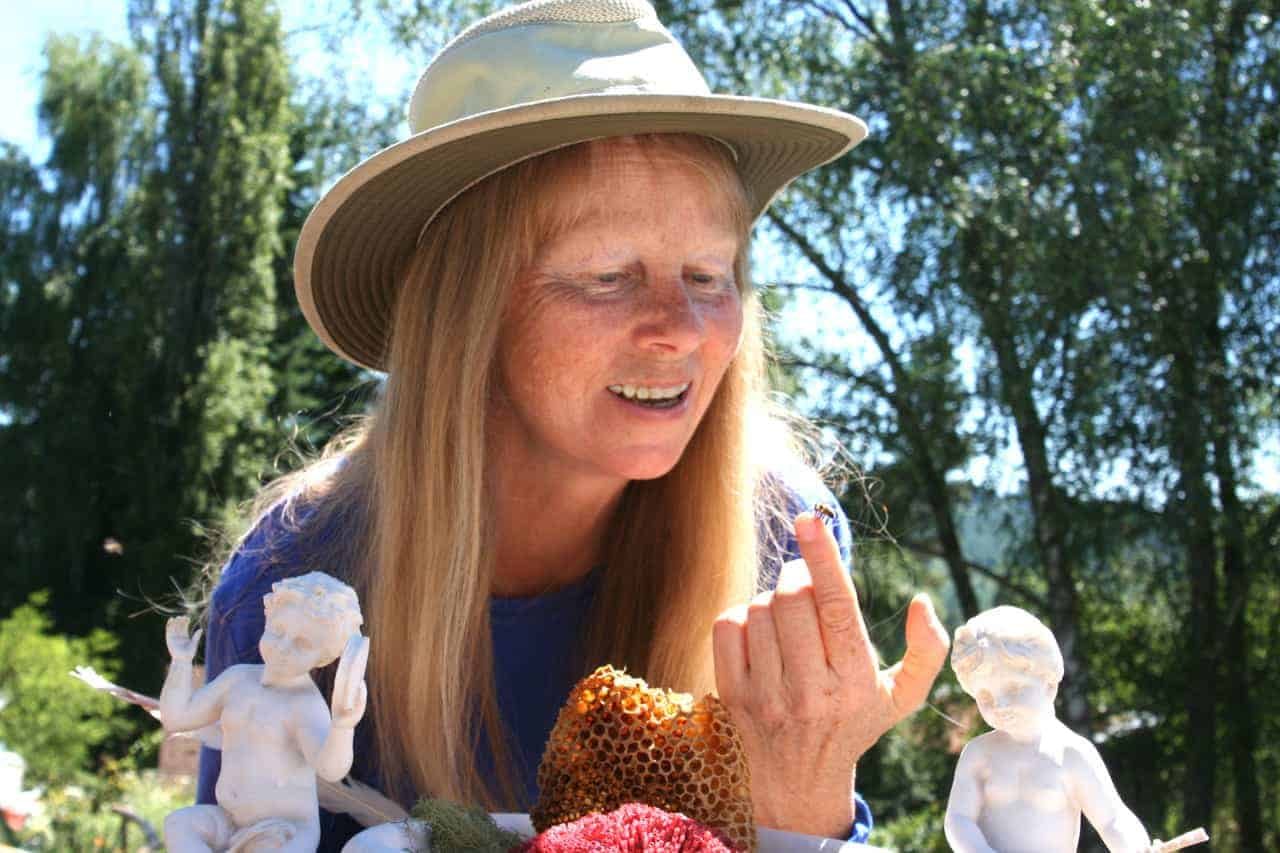 The swarm began like any other swarm. Just a big, roaring, exaltation of bees, 20,000 strong and taking to the sky in a glittering amber cloud. I couldn’t possibly know in those first exhilarating moments that by days end, the bees from RainTree hive would change my relationship with bees forever.

The morning started out warm and lush, and my attention was on all six of my hives. Four of them were telling me, through false starts and bees plastering themselves by the hundreds all over the faces of their hives, that they were in swarm prep mode.

In a bee swarm, a thriving hive of bees will send out their queen and half of the working force of the hive to “birth” a brand new colony someplace. The bees left behind will raise a new queen from the queen eggs that the old queen left behind. It’s how bees do “the birds and the bees.”…

My friend Jane was sitting down by my Genesis hive, drawing and “conversating” with my bees. Jane is a gifted intuitive and new bee enthusiast. I was sitting up in the Bee Parthenon, a covered patio where I keep most of my hives.

Jane was painting, I was on my laptop, and hubby John Carter was tending plants in the garden. With no fanfare, suddenly RainTree was spiraling into the air.  I turned my head to the right to face the sound and the joy of thousands of happy bees winging high into the sky above my head.

I crept on hands over to the front of the hive, and sat back on my heels watch the bees spill forth like rain over a high rock. Then, I looked down at my knees and gasped. There, walking slowly past me, was the RainTree’s Queen! Quickly, I scooped her up. She must have gotten tossed out the the flood of bees and had not yet found her wings.

If I could place her in a small cup with holes on top, the swarm would come down to us! But in my excitement, my shaking hands had grown clumsy, and I watched in despair as she slipped between my fingers and raced toward the sun.

Behind me, the swarm was swirling in a translucent wave that covered the whole backyard. Disappointment flooded over me as I watched the swarm suddenly find the queen scent. Instantly, the vague swirling and milling subsided. They had their queen, and they were ready to find a place to land—not to live, but just to settle for a day or two as their scouts searched out a good homesite.

Quickly now, the bees flew toward the towering cedar in my neighbor’s yard. Swarms of mine had settled in that tree in the past, and always so very high that I could never gather them. In a sad moment of Deja vu, I watched with Jane and John Carter as the bees began settling into a large ball about 30 feet or more up in the cedar

“How can we gather them?” Jane asked.

“We can’t. I call these kinds of swarms my “not-for-me” bees. The chose to be out of reach.

“Is there anything we could do besides stuff that involved ladders, injury and death?”

“Well, in the old times, beekeepers say that they could call a swarm down from a tree by ‘tanging’ or drumming on a pot or on an empty hive. The theory is that the bees hear a hollow resonance. They are looking for a hollow cavity, and they come down to check it out.” I rubbed my forehead. “You know, we have nothing to lose. Let’s go.”

Outfitted with an empty hive box, Jane’s flute and singing bowl, and feeling a odd mix of hope, anticipation, and embarrassment, we set our tools beneath the bees and began drumming, singing, and fluting.

As you can imagine, it was not long before we’d gathered a crowd of neighbors. “We’re calling the swarm down from the tree,” I called out, thinking Yeah…right Susan. Sure you are…

Eric, whose yard the cedar was in, was filming on Jane’s iphone. From where I sat on the ground beneath the humming bees, I saw it before Eric called to us, “The bees are hearing you! They’re reacting! Oh wow!”

From the bottom of the swarm, a portion of bees broke away and began flying over our heads and around our arms. Some came to inspect the empty hive. I had to move my drum sticks to keep from smashing curious bees.

Jane switched from her flute to her crystal singing bowl. The bees, by this time had completely entranced us. I lost track of time, hypnotized by the sound and movement of bees all around me.

The small swarm moved gently to the branch right above the hive: It was the very lowest branch on the Cedar. There are no words in our language for moments like these. Jane’s luminous eyes were as round as saucers. We were both stunned beyond belief, hovering there together in another dimension forged by bees, singing bowls, banging, and flute notes.

There could be no doubt: The bees had heard us and they had answered in the affirmative. The colony in the tree had met us halfway.

It is all such a hazy memory. Perhaps miracles are that way. I told Jane to try her flute again. The bees seemed more interested in it than the singing bowl. There were now two swarms—the small one low in the tree, and the larger mass still 30 feet up—but when Jane started playing her flute again, the large mass reacted instantly. Instantly. In seconds, they lifted back in the air and over our heads.

The crowd backed up. Bees were everywhere, singing. And I mean singing. It was not an agitated sound. Not an angry sound. No, it was a joy sound and it gripped me in my heart as I climbed slowly up the ladder to meet them. Like storm cloud gathering, the tendrils of bees gathered up together in the air. Like a dream, they all joined the smaller bunch of bees on the lower branch. I reached up and cupped the bottom of the swarm in my bare hands. It was warm and trembling and sweet beyond belief.

Fairly quickly then, I brought the hive box up to the top of the ladder and gently scooped handfuls of bees inside. By late afternoon, the bees were in their new home, and we were clearing away our tools, hats, phones, sunglasses, and water jugs.

I thought about Queen RainTree, who had slipped through my fingers. Had I managed to keep hold of her, the magical afternoon would have all played out very differently. I sat next to the new colony, exhausted and utterly devoid of any words. A birth. A richly creative act. Genesis and Exodus at the same time. Thank you, Queen RainTree. I named the newborn colony SpringRain, in honor of her ancestry.

Beekeepers have theories about why tanging and drumming for bees could work, but I believe our theories are far too shallow. I don’t believe for a minute that bees hear “hollow” and get curious. If you had been there with us, you, too, would not believe it was bees hearing “hollow.”

No, like Jane and me, I believe you would say that somehow we had created a resonance that was in some way meaningful to the bees. And by resonance, of course I mean the flute and the bowl and the drumming, but more important, I mean another kind of resonance as well.

We believe, as does my mentor Jacqueline Freeman who has also drummed down bees, that the bees resonated with our desire to serve them, to keep them safe, to answer our call to come, come down, be with us. They resonated to the tune of our hearts and they answered. They exhibited that they clearly understand the concept of relationship across species. Would that we humans could achieve such virtue.

I’m a woman who has to live a lot of my life on faith. Most of the things I believe have no proof behind them, no matter how real they are to me. But dear RainTree conjured an event to show me—proof and all—that our bees listen to us, hear us, and can answer us.

Forever in my soul will live the image of her, lifting like a unchained spirit to float down and extend her amber, flickering hand into mine at the top of the ladder.

Jacqueline said, “How did you feel when they came down to you? For me, it was such a confirmation of our relationship. So magical.” l shared that thought, too, but how I felt as she flew down was humble. Just deeply humble. SpringRain, long may you thrive!

Please watch the video of this remarkable event HERE